Now that we’ve been in Alaska for almost 6 weeks, the regular, annoying, logistical issues involved in relocating are starting to iron themselves out.  Settling into our new residence, finding our way around, and getting started working are mostly concerns of the past.  It’s been a busy time, so really exploring what Alaska has to offer in our immediate area hasn’t been as much of a priority as I’d hoped, especially considering that summer here is almost over, and it sounds like “autumn” as I’ve known it may not exactly exist.

The necessities of day-to-day living have most certainly intruded on my vision of Alaskan living.  We’ve run into two separate couples (one pair including the fabulous Vanessa Runs) who, each knowing their time in Alaska was limited, were really able to live it up, visiting Denali National Park, Fairbanks, Seward, and Homer among other destinations.  If we make it to all of those places in the next year, I’ll consider myself fulfilled.

Despite the reality check, John and I have made some positive progress.  Two weekends in a row took us down to the Kenai Peninsula for fishing during the Sockeye salmon run.  The first weekend was my first legitimate attempt at fishing of any kind, and did not end up successfully.  John, however, came home with 9 salmon.  Our freezer and bellies are very happy and full.

The next weekend was a small haul by seasoned Alaskan standards, but I couldn’t have been more excited.  John caught a Sockeye and a trout, and I came home with two Sockeyes.  Standing out in the Kenai River in my waders, I felt that first real tug on my line, started backing up to the shore, and immediately tripped and fell over into the river, mostly defeating the purpose of my waders.  I hung on to my pole though, and after satisfyingly long struggle, with the assistance of John and our net, got my first catch up to the shore. 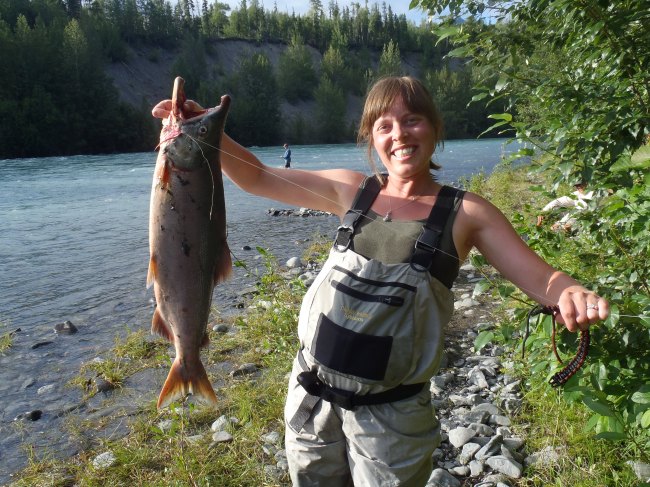 A new and unexpected project that was recently created for us is the issue of vehicle maintenance.

More appropriate mugs would say, “I Drove the Alaska Hiway…and lived!  My car…not so much.”

So far our tally is as follows:

Moral of the story: the cost of driving to Alaska includes more than gas.

My Central Park Hoodie was not finished before crossing the border into Alaska.  But it’s done now!

Since finishing, I’ve done a really cute baby hat, and am 2/3 of the way through a sweater for Si.  Turns out knitting projects do not need to take multiple years each.

Since moving to Alaska, we’ve already moved. We readjusted to our new surroundings over the first month with relatives in Anchorage (thanks Scott and Jaime!), but have since set out on our own.  We headed out of town to Wasilla, because, after all, we didn’t move to Alaska to live in the city.  The commute is significant, but on my way to work I have views of glaciers and mountain ranges, cross two big rivers (the Knik and the Matanuska), and have to keep my eye out for moose (6 have been hit since July 1st).  It’s not unpleasant.  And after living in San Diego County, there is zero traffic by comparison.

Overall, Alaskan life is moving along nicely.  Next up: first day of school with students, preparing for winter, the DMV, and getting ready for baby #2.

Waiting for our table at Moose’s Tooth in Anchorage, which never has no wait. Not never.