I love a good project. I love to learn what tools, skills, and materials I need to start and finish the project, be it making, building, or learning something new.  I love to marvel at how my life will be improved upon completion of the project.

“I’ll never have to buy eggs again after I build a chicken coop!”

“My feet will always be warm after I knit this sock pattern!”

“My life will be complete when I learn to churn my own butter!”

The only problem lies in the disconnect between the idea of the project and the actual completion of the project, which is best expressed by this illustration from Dirk’s Big Bunny Blog:

Most of my projects live out their lives in the realm of my perpetual thought bubble.  Fortunately, I know this situation is not hopeless.  I have many projects that have come to fruition over the years, it’s just that my ratio of planned to completed is not very good.  Alaska, though, seems like the perfect venue for improving that ratio and honing my follow-thru skills.  I expect that exceptionally well developed DIY skills could be quite the boon in Alaska.  Hungry?  Go catch a fish.  Chilly?  Knit up some mittens.  Bored?  Play some guitar, make some soap, or put a new addition on the house.

In true “me” style, I already have quite the list of Alaska projects living and thriving in my thought bubble.

Knitting is one area where I’ve, at least, already acquired some essential skills.  At several points, I’ve even sold some of my projects.  Most of my knitting has consisted of small projects, mainly hats and beanies.  I’m particularly proud of an almost-finished sweater.  I followed the Central Park Hoodie pattern, and used the exact yarn from the model photo because I loved it so much.  The only hang-up with this sweater is that I started it back in March…of 2010.  I’m now publicly committing to completing it before crossing the border into Alaska. 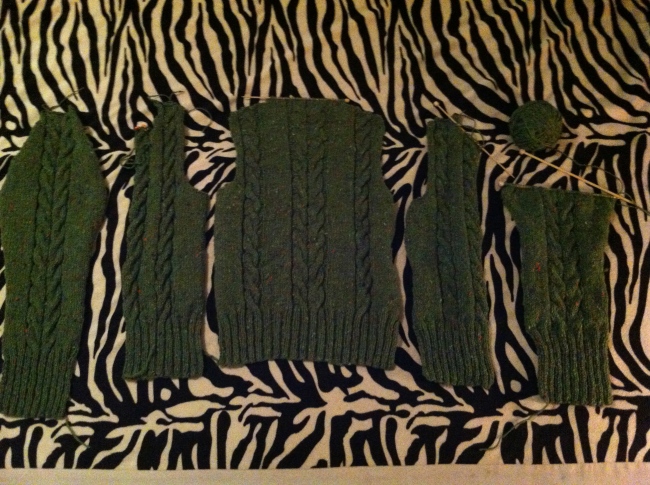 It appears that other knitters have been able to finish the same sweater in a few weeks to a month.  I’m hoping the finished product will give me the confidence and drive to start having my knitting turn over as quickly.  I’ve been on Ravelry an unhealthy amount of time lately, and my knitting queue now has 20 different projects, including more sweaters, a few baby things, and couple choices for my holy grail of knitting projects: a man sweater that will actually be worn.  If long Alaskan winter nights are any assistance to my knitting ambitions, churning out one per month seems reasonable, and gives me almost two years of happily busy fingers.  My current rate of 3+ years per item puts me knitting into the grave.  The former option sounds much more pleasant.

I’ve ambitiously owned a guitar, an antique that belonged to my grandmother, for 13 years.  Once I was able to recognizably strum out the first few bars of “Under the Bridge”, but that’s about it.  The aforementioned Alaskan winter nights, ideally, will prompt a quicker ascent on my learning curve, particularly since we’ve decided to not turn on cable. 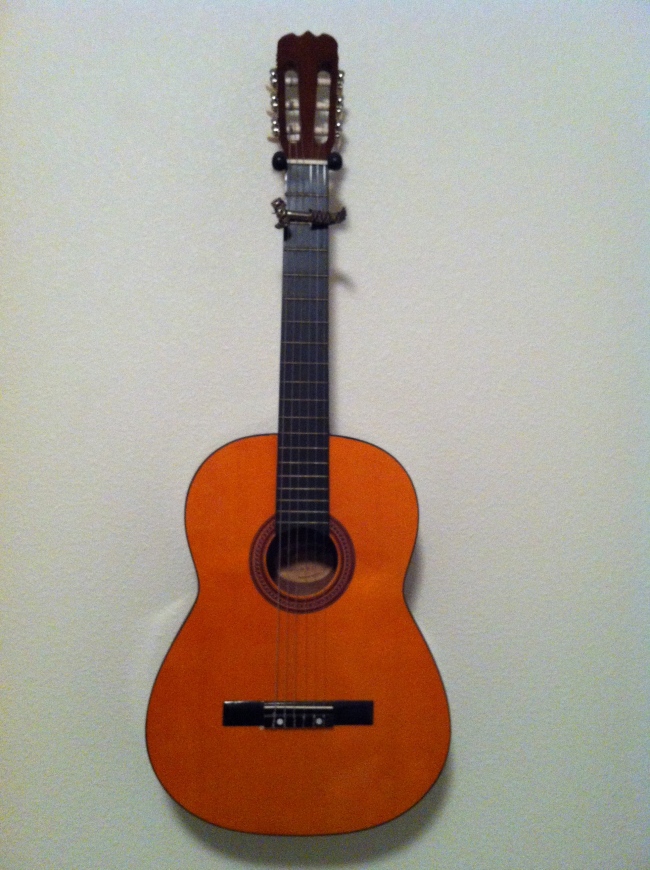 Even though we’re, truth be told, probably going to be living in the ‘burbs, I still can’t shake the image of Alaskan frontier living.  Canning, soap making, eating seasonally, tending chickens and pigs, milking my own goat, and ample hunting and fishing to stock the freezer are all fairly essential elements to my Alaskan dream.  My experience in those areas ranges from “Some” to “Zero”, but I’m working on it bit by bit.  Yesterday I whipped up a fabulous batch of mayo, and Sunday I’m planning on butchering a chicken.  I make no prediction on the outcome of the chicken; it might walk away unscathed.  However, I do feel it’s a certain rite of passage in omnivore-hood.  I’m hoping that certain conditions in Alaska will make my homesteading plans morph from whimsy to mandatory.  If tomatoes in January cost $12 a pound, all the better.

One of my most pivotal ideas that became victimized by project-block was running a marathon.  I had at least three false starts, where I picked a race, started a training plan, and then completely derailed after a couple weeks.  I can’t pinpoint the cause of those failures, because I was indeed finally successful in running 26.2 miles when I raced in a 50k, which is over 30 miles.  After that, I ran a marathon a few months later “just for fun”.

I suppose the ideal running conditions that come with living in San Diego at the time had plenty to do with it, as well as being a bit older, somewhat more disciplined, and having actual responsibilities that were a pleasure to get away from for just a little while.  Regardless, running long is in me now, but I know year-round living in Alaska will certainly present some challenges.  I will likely have to invest in both a treadmill (the horror!) and these beauties to keep up with 50k’s, move on to 50 milers, 100k’s, and beyond, in what promises to be the most amazing terrain and trails I can imagine.

I realize that my particular situation in Alaska will not mandate that I actually complete any of these.  I’m certainly not, in the near future, going to starve without a self-caught and filleted salmon, or freeze without a homemade quilt.  But Alaskan living adds a certain quality to self-sufficiency.  Day to day responsibilities, having a job, taking care of a family, and not a small sprinkling of flat out procrastination have made the back burners of my life much more crowded than the front.  The time is now to address all of those pots, add seasoning, and bring them to a boil.