After 3 weeks of casual packing and 2 days of frantic packing, we left California on a Wednesday, the afternoon of July 3rd. The sum of our remaining possessions fit within the confines of our truck, boat, SUV, and trailer, with plenty of room to spare.  Our little caravan made its first overnight stop in Grants Pass, OR, with my mom, before heading for the international border and trying to leave the US, ironically, on the 4th of July. We drove the fairly straight line up I-5, seeing both Portland and Seattle as only a blur from behind camera lenses.

Both John and I underestimated the gap between Seattle and the US-Canadian border, assuming they were a casual 30-minutes or so apart.  Seeing the “Vancouver, BC – 150 miles” sign going through Seattle gave us a bit of a reality check.  We were at least entertained along the way with almost 3 hours of holiday fireworks as we followed the sunset north.  We barely made it through the Abbotsford border crossing on our planned day after arriving there at 11:30 pm.  Additional delays, including having our boat and trailer inspected by dogs (we seem to put out the gun-toting vibe, despite never having owned a single firearm between the two of us), set us up for trying to navigate a new, international country, pulling trailers, at 2 am.

Our other underestimation was how different Canada would feel.  We expected “North Washington”, but it, in fact, felt like a foreign country.  All indications of culture and humanity, road signs, stores, were just a little off from from the usual, but a multitude of  small differences can lead to a large feeling of bewilderment.  Driving around outside of Chilliwack, BC, in the dark, without a decided destination, only that it be a place to sleep, ended miraculously in that we were never driving into oncoming traffic and we eventually found a not-illegal looking place to park on the side of the road for the night.

The next day, Friday July 5th, went much better.  We had breakfast at a Husky’s in Hope, and discovered that Canadian egg yolks are weirdly pale.  I found this to be true throughout our trip, regardless of the source of the eggs, restaurant or store-bought.  After breakfast, we headed north, hoping to find a nice place to camp for the night.  I noticed then that it wasn’t just the human-made aspects of Canada that felt different, but even the shape of the mountains and the trees weren’t quite what I was used to.  We traveled along a winding river road that made quite a few tunnel passes, and left the aforementioned trees and mountains behind.  We stopped for lunch in Cache Creek and experienced another culinary idiosyncrasy.  Our fried chicken pieces came with one bottle of ketchup and one of…vinegar?  The flavors made sense, but I couldn’t figure out how to apply a squirt of white vinegar to my chicken without having a soggy mess. 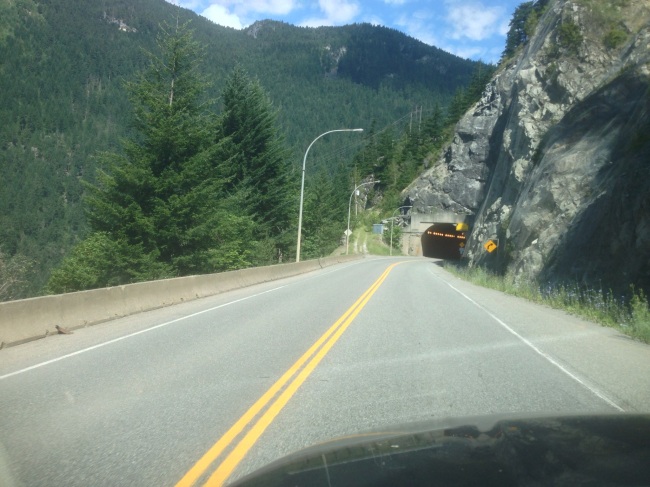 We finally decided during lunch to begin consulting with our copy of The Milepost, the definitive source for all Alaska-bound travelers and their every need.  The great tome informed us that we weren’t far off from Green Lake, which promised campsites, outhouses, a water pump, and swimming, all for $16.  Also convenient was that the denomination could be either Canadian or American dollars.  Most places where we tried to pay with American cash happily accepted it straight across, though I’m pretty sure they got the better end of the exchange rate.

Green Lake Provincial Park proved to be a great choice for our first night of Canadian camping. The area was lush and green, and the lake was crisp and refreshing with a smooth, sandy bottom.  We threw some steaks on the grill, liberally applied our DEET, and chatted with some other campers, amusing ourselves with their Canadian accents.  When asked where we were coming from, John mentioned California, and was surprised at the reply of, “Oh!  I thought I detected a southern accent.”  Wow!  We have an accent! 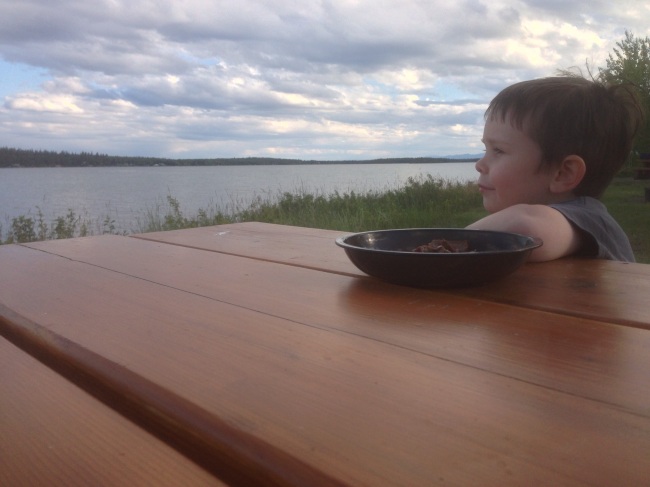 After a propane grilled bacon and egg breakfast, we began a planned high mileage day.  We totaled over 550 miles, but at the expense of having the worst Chinese food ever, our boat backed into a ditch, no camping spaces, and an eventual surrender to the day by sleeping at a rest stop.  You win some, you lose some.

Yuck.  Not advised when in Chetwynd, BC.