A fitful night of sleep had me up at 4:30am on Sunday, July 7th, reconsulting The Milepost.  After a high mileage input the day before, we were interested in having a bit of an off-day.  Only 60 miles down the road was an RV park which promised shower and laundry services, amenities we hadn’t accessed in four days and that, for me, held glorious appeal.

After a breakfast of pale eggs at Sasquatch Crossing (where I’d hoped to find some awesome commemorative mugs since I’d sold all of ours; no dice), we moved on down the road, looking for inviting respite from the drive.  We didn’t end up with showers that day, but found some peace and serenity at Buckinghorse Creek Provincial Park.  We even had opportunities to indulge in our individual hobbies: I made some small progress on my knitting, John had a few beers, and Silas analyzed the local terrestrial composition by caking himself in creek mud.

Feeling refreshed for Monday morning, we departed the campground with the intent of crossing the border into Yukon Territory and embarked on, in my opinion, our most epic driving day of the whole trip.  Up to this point, I was somewhat disappointed in the scenery British Columbia provided.  It wasn’t bad, to be sure, and gave me my fill of lush and green, with black spruce-covered rolling hills as far as the eye could see.  We had even seen a few moose at dusk on Saturday night.  But I had expected Whistler.  Majestic, jagged, snow capped peaks, dramatic valleys, thundering waterfalls, abundant wildlife.  What we saw was more tame and serene.  To be fair, we stuck mainly on the highway, and highways are generally placed on the path of least resistance, which is usually not compatible with “majestic, jagged peaks”.

As we approached the Yukon, though, things began to change.  We started to climb, and so did the mountain summits.  Finally, we saw some snow.  We stopped to grill some sausages for lunch at Summit Lake, and I finally felt like we’d reached somewhere wild, somewhere far enough north that we’d escaped the gravity of mainstream civilization.  After packing up the grill, we passed by Muncho Lake, which was such a radiant blue we has to stop and soak in the view.  After that, the wildlife started.  John narrowly missed a bellowing caribou and a Stone sheep and lamb.  Four bears and several herds of wood bison also crossed our paths. We crossed the border into Yukon Territory, and everything just got bigger.  I had a sneaking suspicion that Big Creek Campground, our planned destination for the night, was going to resemble a California river more than a creek, and it certainly did.  We didn’t even need to convince Pepper to stay out of it, and that dog is nothing if not a water dog. 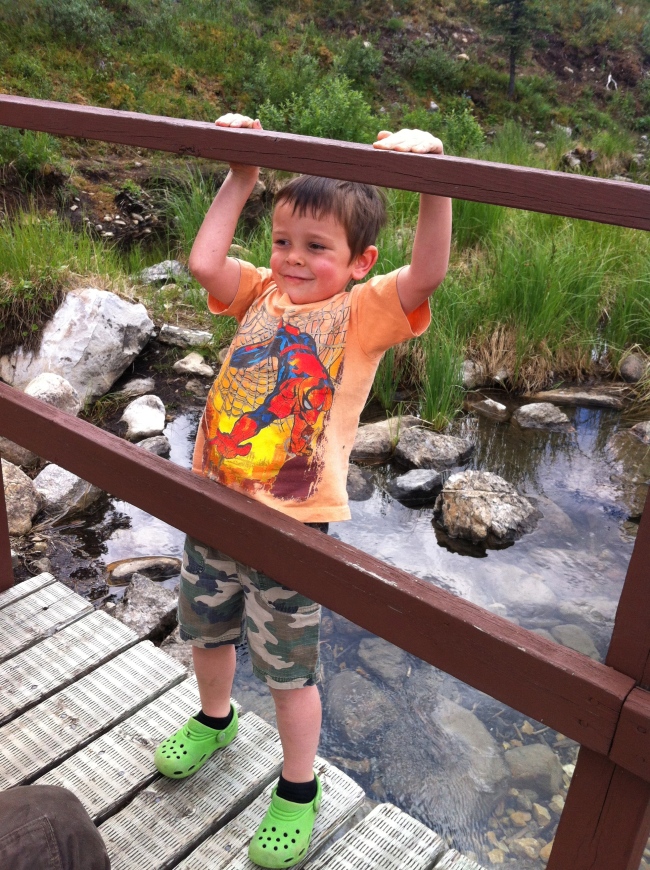 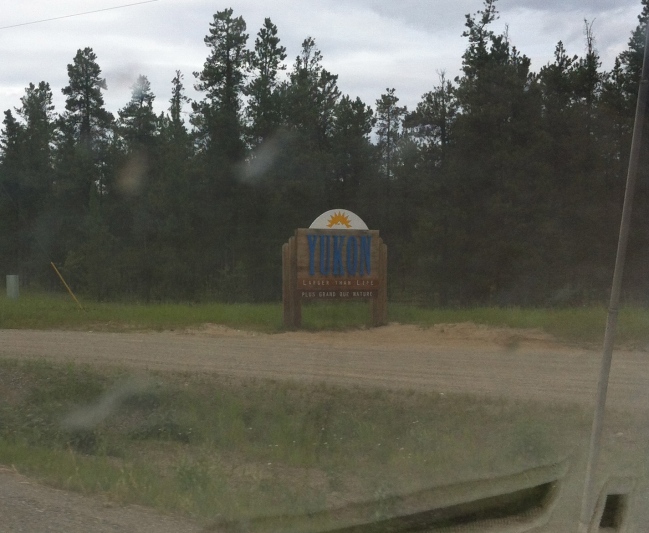